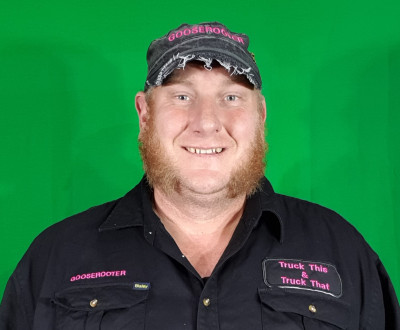 Sitting in a layby in Mid Canterbury, in a pink caravan, inside and out, the story of this month’s Volunteering Mid & South Canterbury and the Hotel Ashburton Volunteer of the Month – Robbie Shefford (Gooserooter) was shared.

Robbie has been volunteering for a long time beginning with Scouts in South Canterbury, followed by being a Scout Leader and volunteer Fire Fighter both Urban and Rural,].

Like many in the Fire service Robbie experienced a diverse array of situations during his nearly ten years with them.
After leaving the Fire Brigade he made a video about some of his experiences and the impact they had on his mental well-being. These videos reached many folks here in New Zealand and overseas and his story and sharing his experiences touched many people.
Now he regularly makes videos, does presentation or provides a drop into his caravan for a cuppa, cookie and chat. While Robbie was being interviewed for this, there was a constant stream of truckies giving him a toot as they passed and one popped in. The week before this interview he had chatted to 75 truckies.

Helping out the community, volunteering, is good not only for those receiving the help but it also helps Robbie out.
Robbie’s caravan came about as he had an idea, he didn’t wait for others to make it happen or offer to help, he set about making the safe space on wheels a reality and when people learnt what he was doing they offered to help and support him. He says “I make stuff happen”.

He got the ball rolling by himself and speaks to rural communities, Youth Famers, Lions groups and goes to truck and Machinery shows and agriculture shows here and in Australia to spread the message to anyone who wants to hear the message of taking care of your wellbeing, having a ‘toolbox’ of tools to go when you have the bad day, as most of use at some stage in our life have a bad day or two.

He’s well known through his Facebook page the grooserooter @ truck this & truck that, where he talks about life, mental health and depression, he also does a regular column in “Snowfed” and sessions on Trucking radio 24/7.
Robbie volunteers his time to raise awareness of mental health, mental wellbeing, its ok not to be ok and helping to normalise these issues.

Because of his own experience he has proven himself, as he has a lived experience. He shares that one person said if it hadn’t been for a message, they heard from him they wouldn’t still be alive.

With a big smile on his face he says, “one person being saved makes it all worthwhile.”

He works hard to ensure his messages have a positive spin.

Robbie want’s conversation about mental wellbeing and health to be something we can comfortably and easily have with each other.