Hotel Ashburton Volunteer of the Month 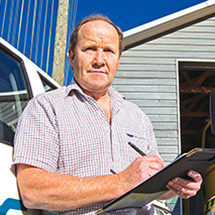 Don Geddes is well known in Mid Canterbury for his work with Fire and Emergency, Civil Defence and the Ashburton District Council, but there is more to Don than his employment. Don is this month’s Volunteering Mid & South Canterbury/ Te Rōpū Tūao i te waenga o Waitaha and the Hotel Ashburton’s Volunteer of the Month.

Don’s nominator said “Don always went beyond the scope of his job with his input to help his community”
When asked why he volunteers with WanderSearch Canterbury Charitable Trust, Land Search and Rescue (LandSAR) Mid Canterbury Rural Support Trust and Mid Canterbury Forest and Bird he said “Communities can’t function without volunteers and we all need to do our part, as there are volunteering opportunities for everyone”.

Don is the chair of WanderSearch Canterbury a role he has held for two years. He has been part of this organisation for six years. WanderSearch was started by a Christchurch couple that Don knew through LandSAR and he was invited to join the organisation. WanderSearch is a Trust that provides locator devices to those who have the potential to wander due to conditions such as Alzheimer, ADHA, Dementia. If a wearer’s device is activated WanderSearch volunteers are contacted and use tracking devices to assist in locating the wearer. WanderSearch have clients throughout Canterbury. Initially. he was more involved with the practical side, helping locate those who missing. He was asked to join the Trustees who come from a diverse background with widespread of knowledge.

For over 45 years Don has been ready in all conditions, at all times and in any terrain to respond to the call, to deploy with Methven LandSAR. As well as the practical side he has been chair for nineteen years and is on the Regional Board. LandSAR volunteers search for those lost, missing in the outdoors and injured such as in the Christchurch Earthquakes. With more people using personal locator beacons there has been a drop in the number of call outs for those lost in outdoors.

Don is passionate about his volunteering especially the LandSAR volunteering. He got involved because it was an extension of his interest in the outdoors and because he gets to play with “fancy toys like riding in boats or helicopters”. But the reward for his volunteering goes deeper than this, he said there is a great camaraderie from working together especially in the more challenging times, you can be working in horrendous conditions, but you share the hardship and create bonds. You learn to be reliant on each other as team, mixing with others who have a similar interest and great friendships are made.

Growing up on a local farm, Don understands the rural sector and this assists with his involvement with Mid Canterbury Rural Support Trust. Don has been a Trustee with Rural Support for a few years now. He is the Deputy Co-ordinator of the Response sector of Rural Support.

If you want to know how many of each kind of bird is on the Ashburton Lakes or in the Ashburton Riverbed, then Don can probably tell you. Since 1984 Don has organised the Ashburton Forest and Bird, bird count, with the information gained past onto the Department of Conversation. Volunteers from Mid Canterbury Forest and Bird, DOC, ECAN and BirdsNZ listen, look, and note the birds that are in these areas annually. Don is a committee member of Forest and Bird, who helps where he can as well as being a very good photographer of birds.

Don’s nominator said, “Don will never turn down a request to help either an individual or organisation in need and always with a smile”. That is true, as Don said, “as an individual I help with some trainings with Scouts”. Don has voluntary, taken many Scouting groups on trainings in the outdoors such as learning river crossing skills, which he taught himself. He then started taking Ventures on an overnight tramp that progressed to two nights and he has now done fifteen of these.

If you are a Not-for-Profit Group, an organisation that engages volunteers and you know someone who deserves to be recognised for making a difference with their volunteering nominate them for the Volunteering Mid & South Canterbury/ Te Rōpū Tūao i te waenga o Waitaha and the Hotel Ashburton’s Volunteer of the Month. Nomination forms can be obtained from coordinatormc @vmsc.org.nz, ph 3081237 ext 240