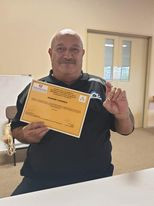 Twenty years ago, Henare started volunteering at Hakatere Marae digging the Hangi pits. From there he worked his way up, working around the Marae, helping wherever he is needed and he is always the first one to put his hand up to help.

Henare is now a Kaumata (Maori elder), leading powhiri’s, working with Marae families and helping in the community. He assists the Marae co-ordinator, tides up around the grounds of the Marae, grows vegetables to help others, helps set up the Marae for events, Huis, tangi’s or taking people to appointments locally and in Christchurch. As a Kaumata he visits older members of the Maori community in their homes or rest homes and retirement villages, he prays with them, and provides a supportive presence and a listening ear. He has been asked to bless houses following a death and Pounamu carvings and taonga, which is a very important part of tikanga.

He is a member of the Kaumata Club run by Presbyterian Support which brings together the Kaumata. Henare says “it’s like a peer support group for older people, our senior citizens”. The Club has been going for two years now. During lockdown they gave out a significant number of care packages to those in our community who needed that extra support. For the Kaumata Club, it is about looking after the community at a time of need. This is something Henare is very good at as he is training to be a Civil Defence volunteer and will more than step up to this role when the need arises.

In 2009 he became a volunteer Maori Warden. The Wardens work alongside the Maori community as well as in the community. Henare work as Warden sees him working in both Mid Canterbury and Canterbury. Maori Wardens provide patrols and night and security and safety at community events.

Growing up in the Urewera, as a member of Tuhoe, Te Reo is Henare first language, and his passion is to pass on his knowledge and skills of all things Maori to the younger generations.

He is very involved in the Wananga teaching youth Maori skills and Tikanga – martial arts, traditional skills and values, weaving, pois and waiata’s.

Henare does all his volunteering because he loves doing the work, it is Te ha Maori, which is so important and so much a part of his life. For Henare it is about Tikanga and the Wairua.

From his volunteering he gains self-satisfaction and ensure the Maori cultural which is so much apart of him is keep alive.

Hakatere Marae, which is a Marae that belong to everyone, welcomes more volunteers, there is something for everyone to do who wants to volunteer at our Marae.

Henare is appreciative of the Hotel Ashburton support of award of Volunteer of the Month.

If your organisation has a volunteer you would like to nominate for Volunteer of the Month - email
manager-midc@vmsc.org.nz for a nomination form.