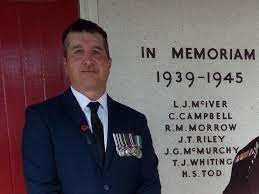 When Reon Blake says “Lest we forget and We will Remember them” they are not empty words. Reon really means them, and his pictorial Roll of Honour shows that commitment to remember those who died serving our country.

Reon is one of our Volunteering Mid & South Canterbury and the Hotel Ashburton Volunteer of the Month.
Growing up in Mayfield, Reon remembered seeing the names of the Roll of Honour, men who he knew nothing about, but they were from the Mayfield District. His Dad would talk about the men and their families.

Reon decided that these men needed to be remembered, after all they had been through, the things they seen, felt and then died for their county. Reon himself knows something of that experience having been a Police Officer for sixteen years including three years Peace Keeping with the NZ Police in the Solomon Islands.

Reon set about creating a pictorial Roll of Honour of the men, from the Foothills area of Mid Canterbury who went the First and Second World War and didn’t return. The total from the area who lost their lives in these wars was 110. The area covered is from Alford Forest, Westerfield – Crewe. Reon with help from the community, Ashburton Museum and Mid Canterbury Family History group has 105 photos, just five missing from World War 1. In total probably 800-900 men from this area went to war. The loss of 110men, would have had a dramatic affect not only on their families but the communities as well.

This year, on ANZAC Day, the power point presentation of these 110 men, was played at the Mayfield ANZAC service. It was a very fitting and very moving presentation. Not one to say well that’s achieved, my work is done, Reon is now turning these photos and the stories he is gathering of these Soldiers into a book. He’s not selecting just a few men, he wants to tell all their stories, to keep their sacrifice and memory alive for generations to come.

When the last of the districts World War 2 veterans passed away the Mayfield RSA disbanded and the Mayfield Red Poppy Society formed. It’s a good, solid group of people who organise the local ANZAC service each year and Reon is Vice President of the Society.

When Reon isn’t busy on the family farm, being a husband and Dad, he is found helping his community be in with his involvement in the Mayfield School or the Ashburton Aero Club and this year the Poppy and Star Flight. Reon says ‘that communities like Mayfield are small and people need to put their hand up and volunteer to keep the community, the schools, halls, domains etc going”

As a Pilot when Reon heard about Poppy Flight and that it was raising awareness and funds for the Returned Services Association he jumped at the opportunity to be involved. He flew from Timaru to Oamaru. He said he was so surprised when he landed at Oamaru, thinking he would just park up and hand the bag containing the Poppy and Star banners over, but instead he was greeted by a large crowd of 300-400 people, who clapped him as he disembarked from his plane. He said he ‘loved it”.

It’s clear the Reon gets as much back from volunteering, and he gives. He wants to help others; he cares about his community and the district and volunteers, to make a difference.

Do you know a volunteer in your organisation who goes above and beyond and deserves recognition, why not nominate them for the our Volunteer of Month awards - nomination forms are available from manager-midc@vmsc.org.nz